The strategically-located TLC claystones project is located in one of the world’s most under developed lithium sedimentary basins, near the town of Tonopah in Nevada. Notably, it is in the same geological environment as Albemarle’s world-class Silver Peak lithium mine and several advanced-stage lithium projects.

The region is a center of epithermal mineralization that produced 138 million ounces of silver, as well as considerable molybdenum output too. 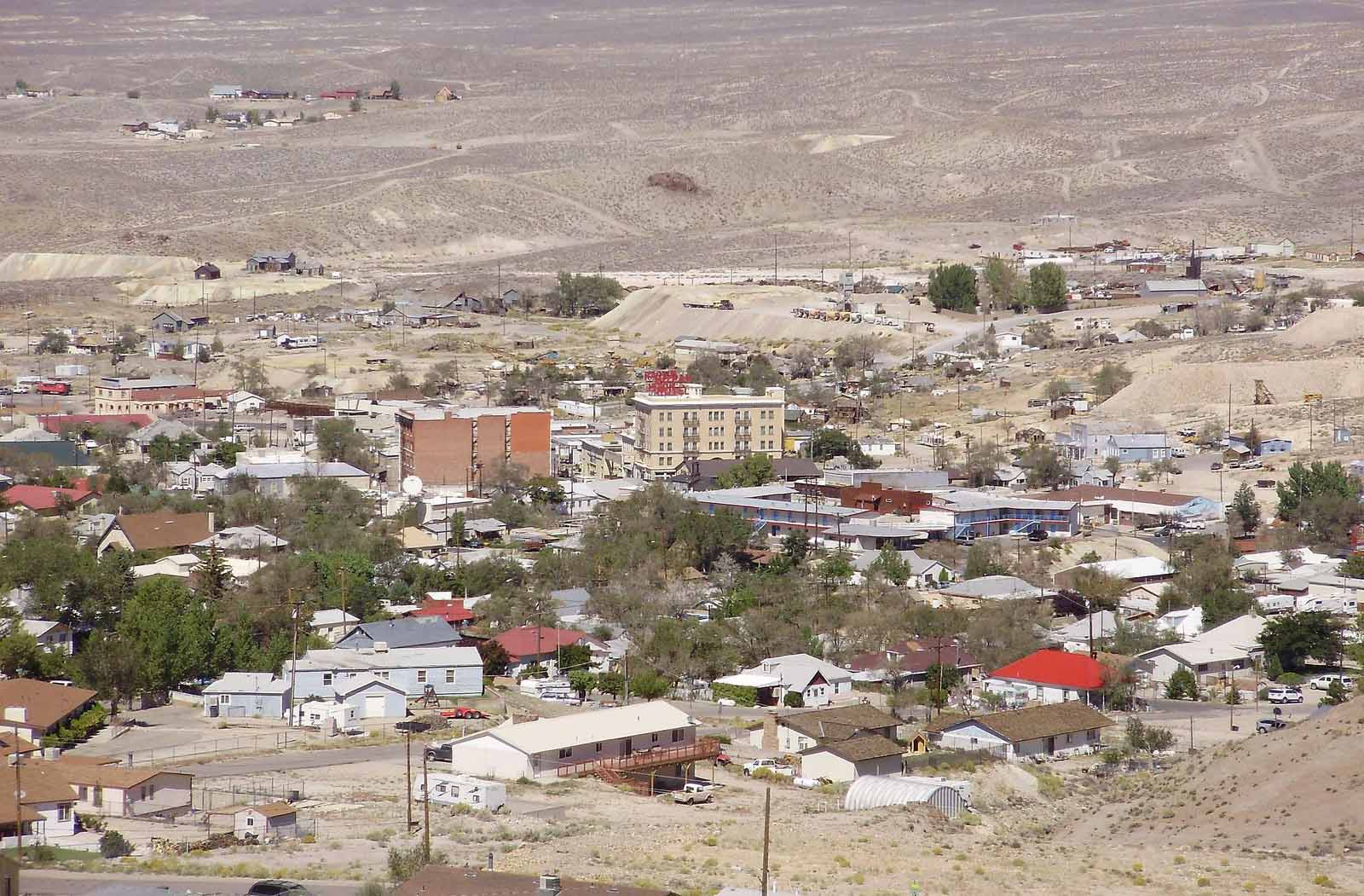 Nearby town of Tonopah, Nevada 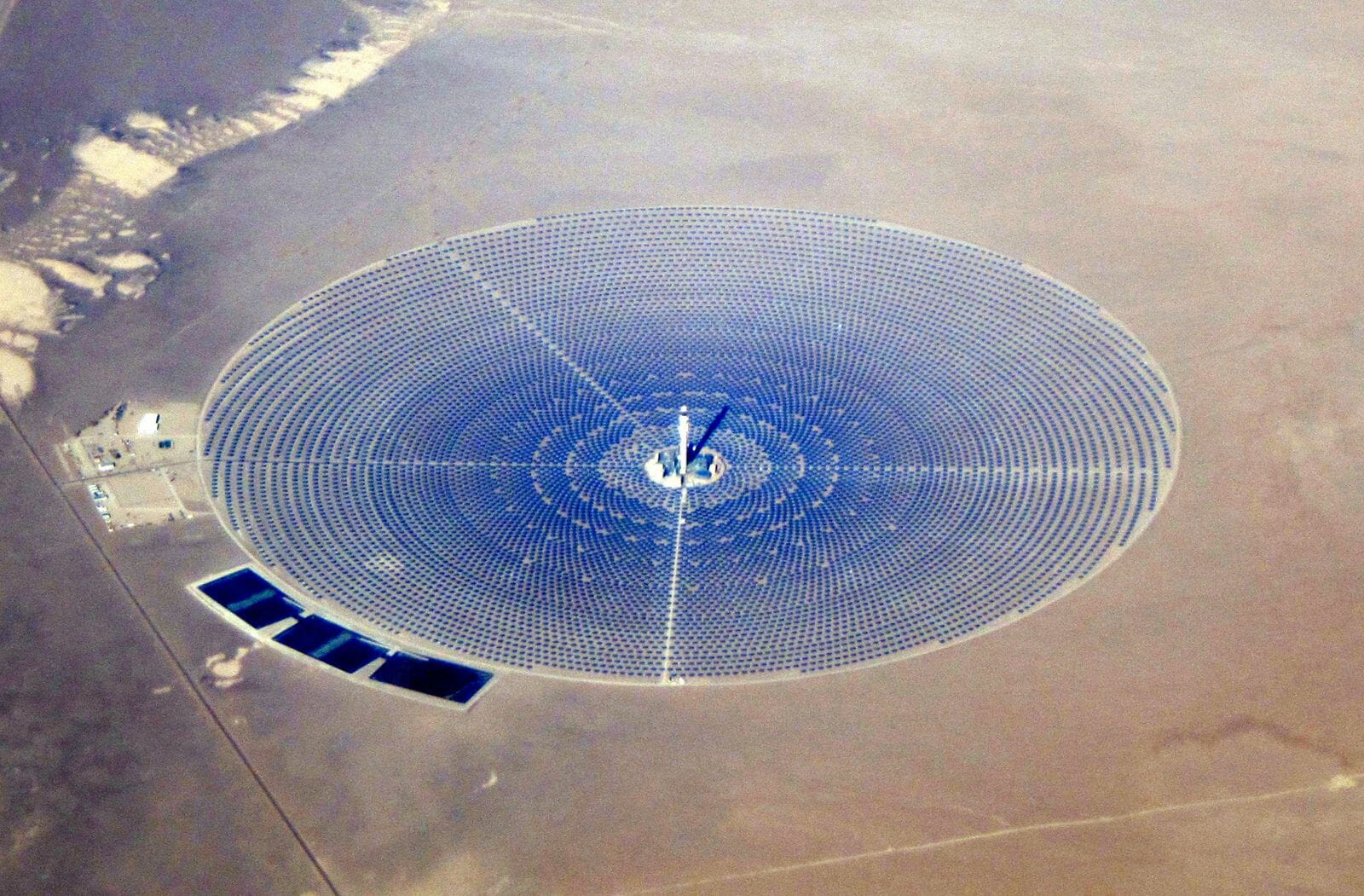 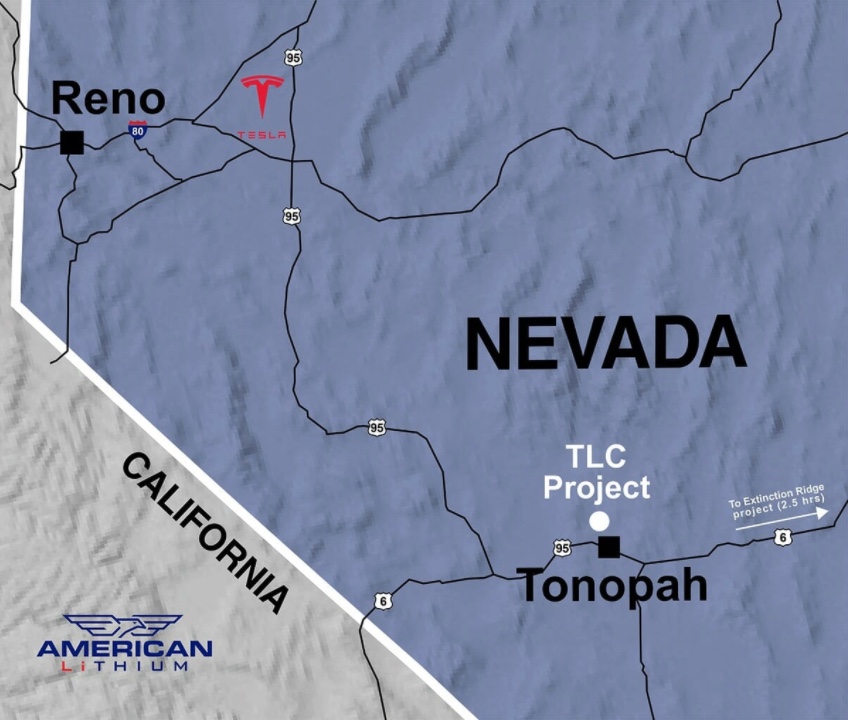 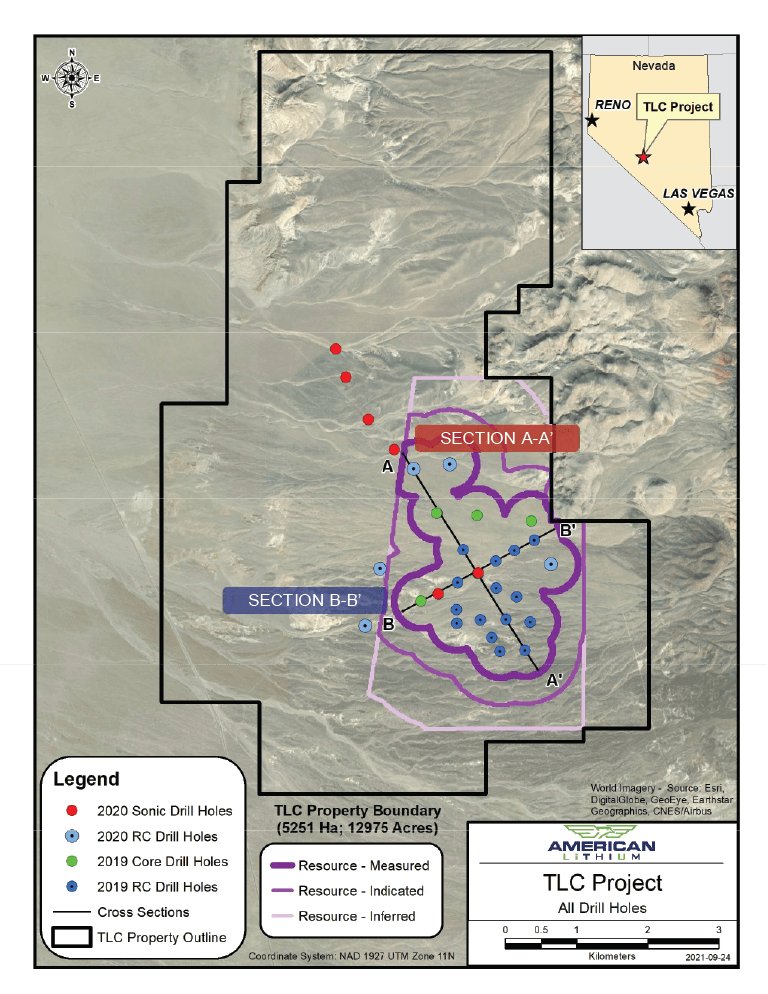 The Tonopah Lithium Claims (TLC) Project is a lithium sedimentary deposit located near the regional hub and county seat in the town of Tonopah, Nevada. Consequently, logistics (paved roads, power, etc.) are superior for development and water resources are not constricted as at Clayton Valley.

Samples at TLC run low in calcium, indicating the potential of utilizing low-cost heap leach process for recovery of lithium. Similar to Lithium America’s Kings Valley claystone deposit, TLC is on the periphery of an area of former uranium exploration, though none of the TLC samples taken carry appreciable uranium or thorium. Data from the uranium exploration indicates that sediments in this (sub) basin are at least 600 feet deep (Appendix B; Nevada Bureau of Mines Bulletin 92 indicates the sediments might be 1000 feet deep). 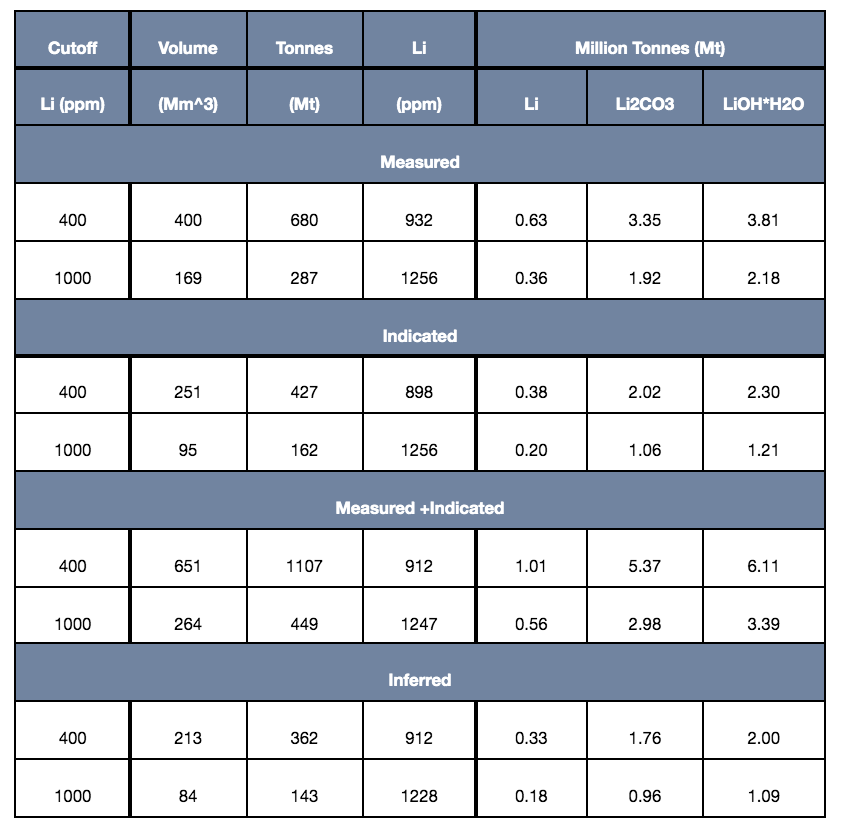 Tonopah is an unincorporated town and county seat of Nye County, Nevada, United States. It is located at the junction of U.S. Routes 6 and 95, approximately midway between Las Vegas and Reno. It is home to the second-richest silver strike in Nevada history and was explored extensively since the early 1900’s.

The TLC project is just outside of Tonopah to the northwest. This is a new lithium claystone discovery and there is nothing in literature concerning the deposit. It is part of the Miocene age Siebert Formation consisting of sedimentary and pyroclastic rocks (Nevada Bureau of Mines Bulletin 92, Appendix A). The area of the TLC lithium deposit must be a a sub-basin of the Siebert possibly formed in a graben or half graben, as it is the only area of the Seibert Formation documented to have diatomaceous earth layers, indicating a long-lasting lake. Indications of fossil activity (travertine terraces, sinter outcrops, et c.) are ubiquitous throughout the area of the TLC claims. 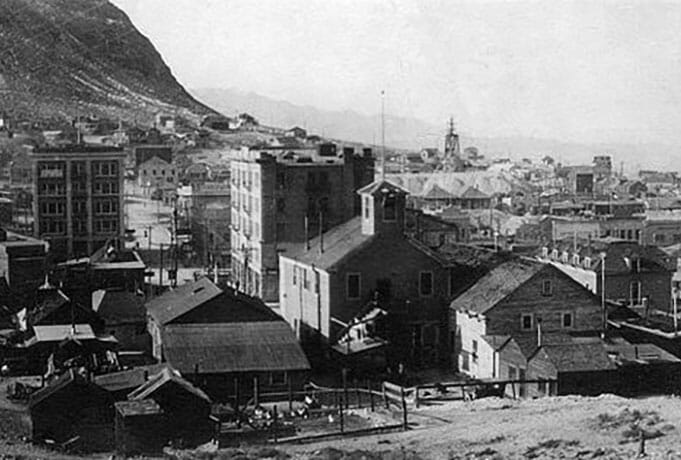 Tonopah, NV circa 1913 at the height of the silver mining boom 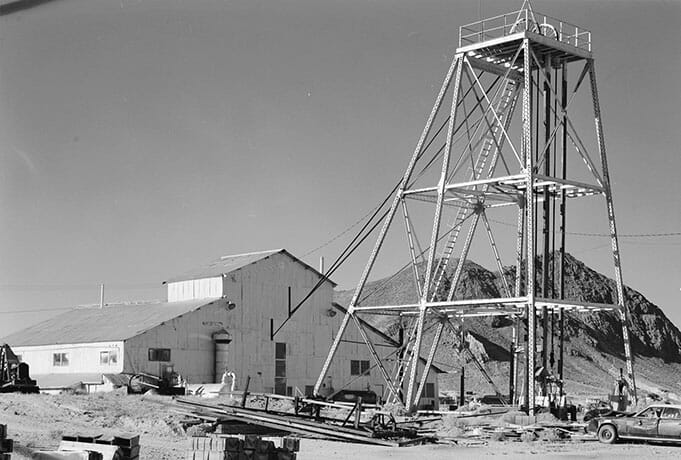 The Basin and Range physiographic province of the United States includes Nevada and parts of Arizona, Utah, and California. It consists of rugged nearly parallel northward-trending mountain ranges and broad arid trough. with interior drainage. Elevations range from 4,000 lo 14 ,000 feet, above sea level. The valleys are filled with thick accumulations of water-laid pyroclastic rocks, silts, fanglomerates, and evaporites. Ephemeral saline lakes and playas are found in many of the valleys as a result of interior drainage and arid climate. Gently sloping alluvial fans extend from the mouths of canyons toward the low central portions of most of the valleys.

Evidence of alpine glaciation is apparent in the higher mountains, and shorelines of Pleistocene lakes con be observed locally along the foothills. The highly alkaline soil of many of the valleys supports little vegetation other salt grass and sage, but several types of conifers abound in the mountainous areas. The climate is semiarid to arid; therefore, the region is sparsely settled because habitable areas are dependent upon surface-water supplies.

The majority of the rocks of the Siebert Formation as evidenced relative to Seibert Mountain 2 km southwest of Tonopah, were deposited under alternating fluvatile and lacustrine conditions. The Tonopah area was probably a lake, surrounded by grassy, shrub-covered plains. The margins of the lake were shallow, and detris was supplied from the erosion of older volcanic rocks plus added pyroclastic material, most of which came from vents that were later filled by Brougher Rhyolite. The lake may have been somewhat alkaline, but was occupied by gastropods, ostracods and fish. Periods of partial desiccation occurred, and temperatures occasionally may have fallen below freezing. Algal mats were present along the shore in places and lake tufa was deposited locally. 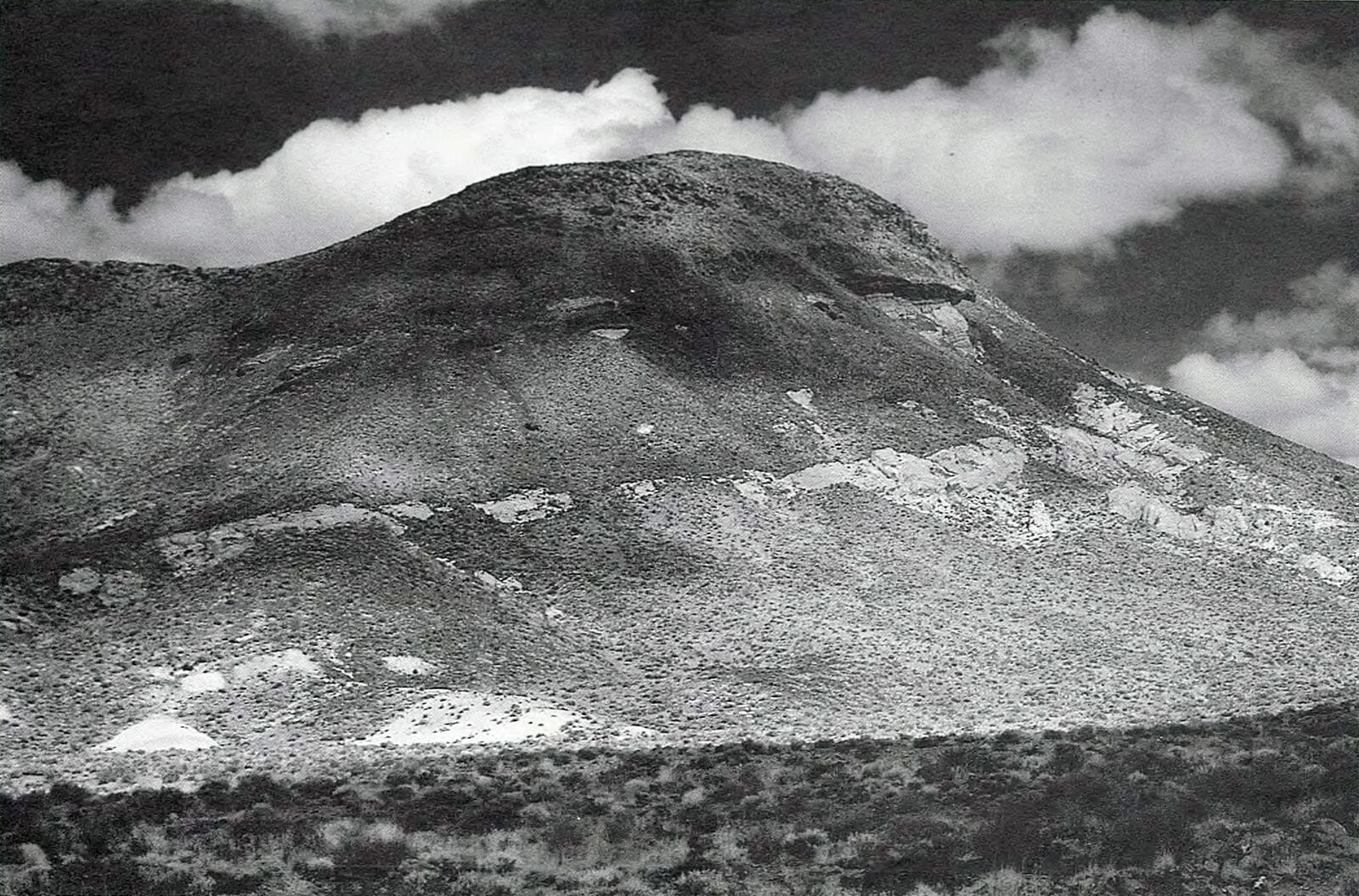 Siebert Formation at Siebert Mountain, 2 km southwest of Tonopah. White tuffs and lapillistones overlain by a thin trachyandesite flow (dark band). A flow of Brougher Rhyolite forms the top of the mountain.

The late Tertiary was a period of increasing aridity in the Great Basin (Axelrod, 1940). The climate may be comparable to that described by Axelrod (in Barrows, 1971) in the Eastgate area, 150 km to the northwest. At that locality, the Eastgate flora indicates a rainfall of about 102 cm per year, with a mean annual temperature of 10°C and a mean annual range of 12° C. The precipitation was probably seasonal, with more moisture in the winter months. Following deposition of the sediments, a number of authigenic minerals were formed, especially in the lacustrine deposits. Zeolites (erionite, clinoptilolite, and analcime) are found as alteration products of tuffaceous material in the sediments. Also, authigenic potassium feldspar is present locally as overgrowth rims on detrital potassium feldspar grains.

The region was a geosyncline during much of the Paleozoic and Mesozoic eras and great thicknesses of sedimentary rocks accumulated. In Late Jurassic time, the Nevadan orogeny accompanied the uplift of the Sierra Nevada Mountains, which bounds the province on the west. Erosion has exposed the granite core of this range. During Late Cretaceous and early Tertiary, folding and thrusting of the Laramide orogeny deformed the sediments in a southward-trending zone that extends from Canada to Mexico.

The principal intrusive rocks range from Jurassic to Miocene in age. Younger plutonic rocks are found in the eastern part of the province, whereas those in the west appear to be related to the Sierra Nevada batholith. Extrusive volcanic rocks, varying in composition from rhyolite to basalt are Tertiary to Recent in age.

High-angle faulting subsequent to the Laramide orogeny determined the present topography of long graben valleys partially filled with alluvial debris from the intervening mountains. Some of the fault arc still active, as evidenced by local displacement of alluvial fans along the flanks of some mountain ranges.

The Property is underlain by Oligocene to Miocene age rhyolitic tuffs, ignimbrites and breccias similar to the upper volcanic complex of the Sierra Madre Occidental. This succession was subjected to basin and range extensional normal faulting during the Miocene that resulted in the development of a series of half-grabens. The half-grabens locally filled with fluvial-lacustrine sediments and intercalated tuffs. Alkaline volcanism around this time is thought to have contributed lithium and other alkali metals into these basin deposits.

Controls for the lithium sedimentary sequence and resulting mineralization are believed to follow the shape of a lake in which the clays became entrained. Faults underlying the lake may have served as channel ways for lithium-rich solutions to percolate into the lake basin and possibly alter and enrich the existing clays in lithium. Alternatively, the lithium may have been sourced from underlying volcanics and remobilized into the basin sequence at a later date. 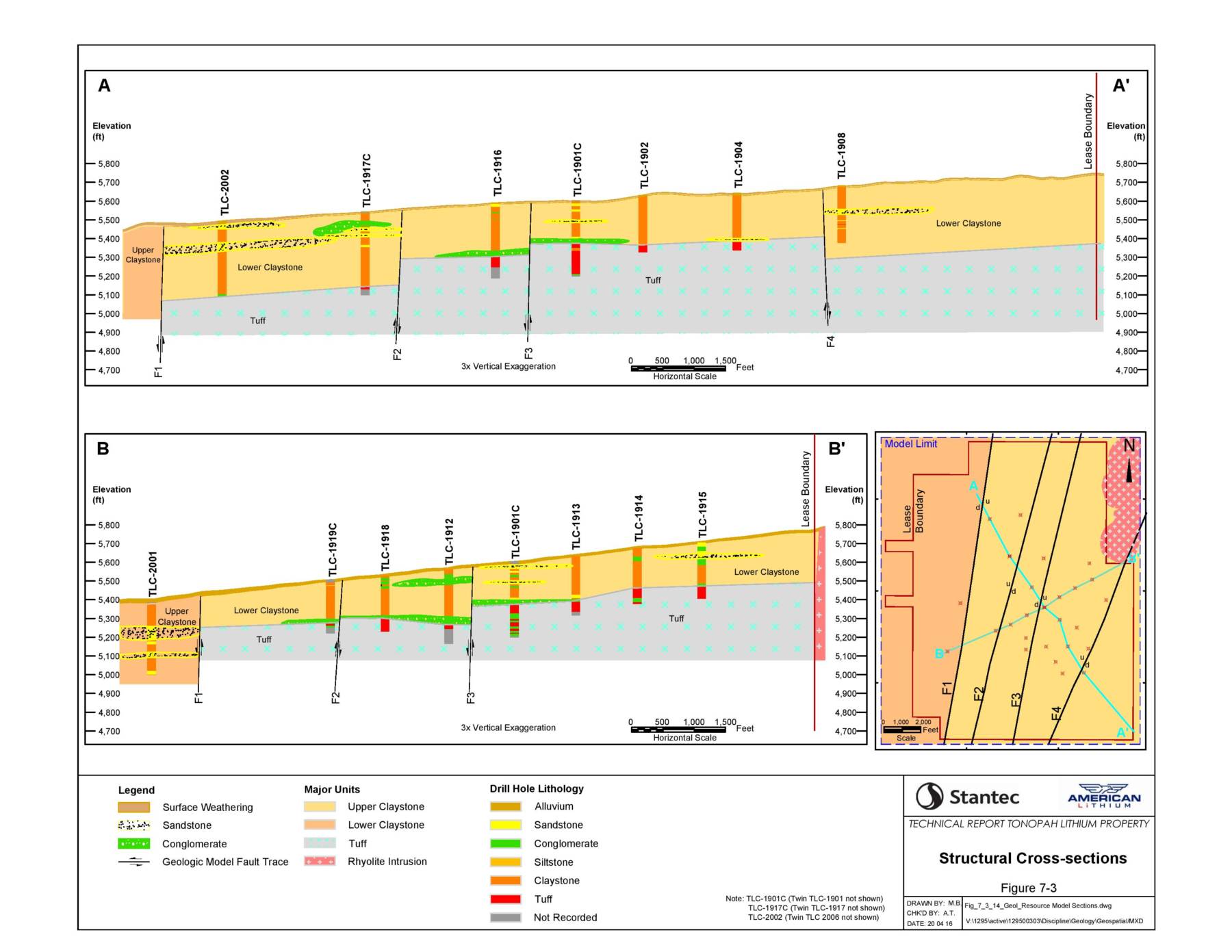 This diagram shows the setting of diatomite deposits in a lake and some of the processes that aided their formation. Rainfall produces streams that carry silica (Si02) and other nutrients, such as phosphorus (P), into the lake from nearby highlands. Silica also can enter the lake in air-fall ash that was erupted from vol­ canoes and deposited on the lake’s surface. Sunlight provides light for photosynthesis, which enables the diatoms to grow and bloom. After the diatoms bloom and die each year, their silica skeletons settle to the bottom of the lake and form a thin sedimentary layer. Over thousands of years, these layers accumulate to form a diatomite deposit.

2019 drill program found samples up to 2,460 ppm lithium with numerous samples over 1,000 ppm lithium. Surface grab samples taken on the TLC claims over an area of two square miles, assay from 220 ppm to 1810 ppm lithium, with 9 samples above 1,000 ppm lithium. Clay, silt, volcanic ash and diatomaceous earth are interlayered.

There is substantial evidence of fossil hot-springs throughout the area. Some samples contain thin (mm scale) bands of sandstone, thicker sandstone beds were not sampled. Exposed sandstone beds are about 1 foot thick. The lithium mineral in the TLC samples is apparently not hectorite (a silicate mineral), as using MS 61 (4 acid) gives lower lithium values than using MS 41 (aqua regia-2 acid).

The adjacent map shows the existing resource at TLC and also the new drilling locations per the application for a Plan of Operations submitted in January 2021, which application has now been accepted by the BLM and confirmed as complete. Approval is anticipated shortly with drilling anticipated to commence later in Summer 2021. 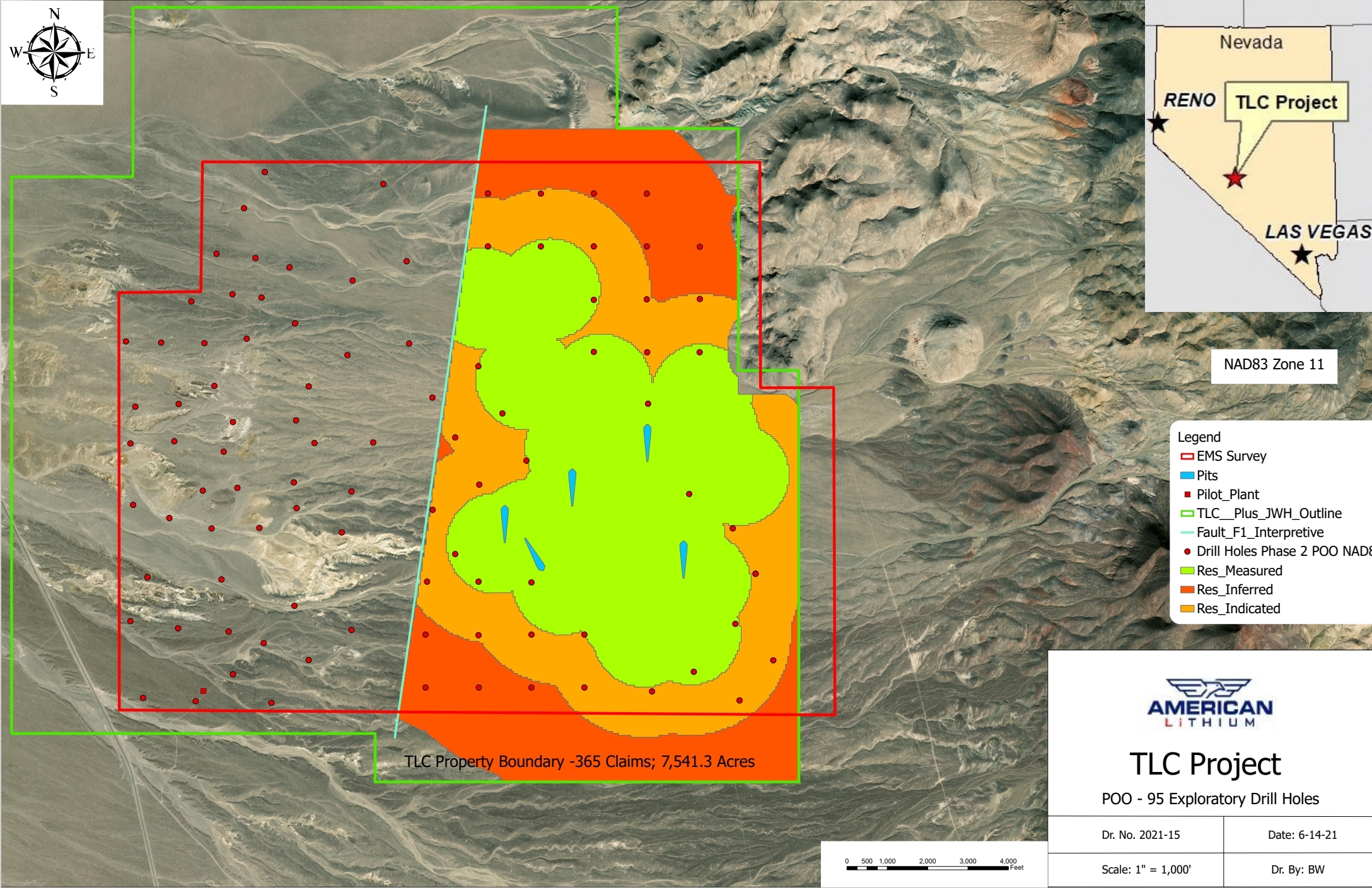